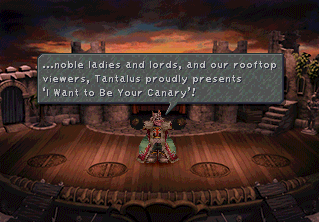 It may seem to some a bit of a stretch to connect a Final Fantasy game with Shakespeare, but some may also realize that much of today's popular fiction, in any medium, is influenced by Shakespeare to some degree. Final Fantasy IX, of all the Final Fantasy games, seemed to be most highly influenced by the bard and is filled with elements from his plays. The game even has constant allusions to a fictional playwright named Lord Avon (a reference to Shakespeare's birthplace) and his play entitled "I Want to Be Your Canary." The protagonist of the story, Zidane, is a member of a troupe of actors who also take on nefarious tasks on the side. At the beginning of the game, Zidane and his troupe are about to perform "I Want to Be Your Canary" for the queen and princess, as well as any townspeople who manage to obtain a ticket to the show. "I Want to Be Your Canary" bears a striking resemblance to "Romeo and Juliet" as the story revolves around a forbidden love, which ends in the lovers' deaths. During the play, we witness young Vivi trying to access the arena where the play is being performed, only to be turned away. Vivi, however, is befriended by an impish boy named Puck, who helps him sneak in to watch the show. Yes, Puck resembles his namesake from "A Midsummer Night's Dream" and may be an intentional reference.

Aside from the obvious references presented in these opening scenes, there are many Shakespearean elements that are used throughout the game. A major element present is the motif of separated twins. Late in the game Zidane learns that the antagonist of the game, Kuja, is, in fact, his brother -- and not only his brother, his twin. Shakespeare uses the archetype of separated twins frequently throughout his plays. One of his notable uses can be seen in "The Comedy of Errors", in which the separation of two sets of twins causes a maelstrom of mistaken identity jokes and confusion. Final Fantasy IX does not follow this pattern, however, because Kuja has changed his appearance drastically enough that he and Zidane do not strongly resemble each other. The animosity between the two brothers more closely resembles "The Tempest," in which Prospero seeks revenge against his brother.

Another common Shakespearean element present in Final Fantasy IX is regicide; yes, it's Shakespeare's favorite plot device, which can be found in Hamlet, Macbeth, King Lear, etc. (Too many of Shakespeare's plays contain regicide for me to list them all). In Final Fantasy IX, Queen Brahne becomes a principal villain, and the characters must battle her actions throughout much of the story. Queen Brahne's death is not caused by a direct homicide, but rather through an act of war directed by Kuja. Yet Brahne represents the crazed monarch that Shakespeare so often wrote into his plays -- she is reminiscent of King Lear, Macbeth, or even Richard III, and she is killed through human actions.

I could likely write an entire book on Shakespearean influences in Final Fantasy IX, but the above are some of the most prevalent examples. The inclusion of a fictional playwright named Lord Avon and a play that is closely based on one of Shakespeare's most famous plays indicates that the creators of Final Fantasy IX were familiar with Shakespeare and likely intended to write the story for the game in the Shakespearean tradition.