July 16, 2013
I recently played indie game "Dear Esther" after receiving it in one of the latest Humble Indie Bundles. It was a simple game that I finished in just a few hours, but when I reached the end of the game my primary thought was "this game completely fits the idea of video games being literature."

The tag line on the game's website says, "A deserted island... a lost man... memories of a fatal crash... a book written by a dying explorer." This is exactly what the game is. As you progress across the island, you hear diary entries written by the narrator in which he addresses someone named Esther. These entries are scattered and do not follow a clear timeline -- they are very stream-of-consciousness and do not explain all of the background of the events explained in the diary. Players (who could be called readers, as the diary entries are written across the screen as they are read aloud by the narrator) begin to feel a sense of unease about the island and about the man whose thoughts and actions we are following. By the end of the game, you feel as though you have a fair understanding of the man's past and his relationship to Esther, but there are still obvious holes in the story that remain unexplained.

Interestingly, the game is more of a visual, illustrated novella than anything else. The action of the game mainly involves exploring the island and listening to the diary entries of the narrator. Instead of merely reading a fictional diary, readers/players are given an incredibly beautiful landscape to explore and view while being given the story. I have heard this game described as being in the horror genre, and I would agree, but it has nothing to do with shooting zombies or running from mutants (as is common in most games in the horror genre). The horror of this game is in hearing and piecing together the horrible and immensely sad memories that our narrator shares with us.

Below, I have included some screenshots of "Dear Esther" where you can see snippets of the story line (no spoilers!) and judge for yourself how literary the game seems to you. 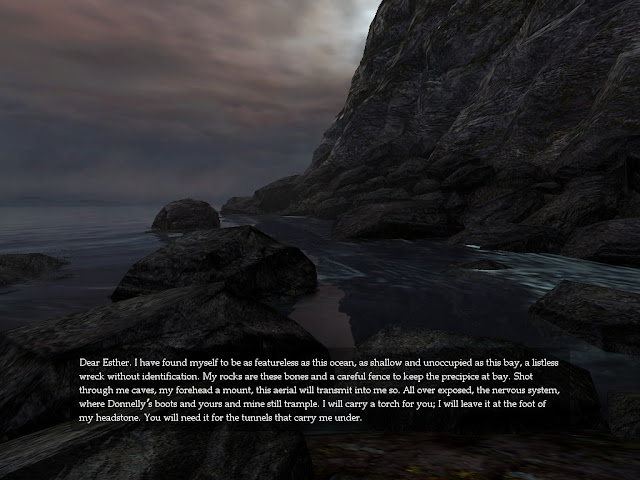 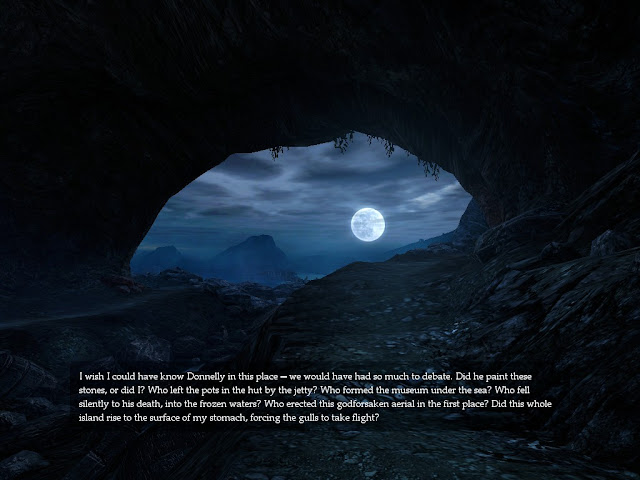 For more information about this game and its complex storyline, see the "Dear Esther" wiki.
Dear Esther stream-of-consciousness