July 13, 2014
Originally, I thought I would write on the Elder Scrolls series. Right now that's looking like too huge a task, so I will instead take a look at its post-apocalyptic sibling, Fallout. Fallout (in this case, I will be speaking mostly about Fallout 3 and Fallout: New Vegas) is huge. The world in which this series takes place is a post-nuclear apocalypse United States: specifically what was once Washington D.C. (the Capital Wasteland) and Nevada (New Vegas/ The Mojave Wasteland). While these cities are familiar territory in our time, the Fallout series makes them a whole different world: one in which each character, city, and object has its own deep history and back-story. Some of the history of this world is based in true historical fact -- and the 1940s theme present in the music, dress, and atmosphere of the game leads to an incorrect initial impression that the apocalypse took place during World War II. Instead, the "Great War" took place in 2077 -- several decades in the future. The history of the Fallout alternate world is well thought out and complex. If you visit the timeline compiled on the Fallout Wiki, you can read a long alternate history that is so detailed it seems as though it could be real. The information on the timeline mainly comes from the famed "Fallout Bible" -- a series of documents used by the game's developers to keep track of the world they are creating. Much of the information, however, also comes from clues within the games themselves. 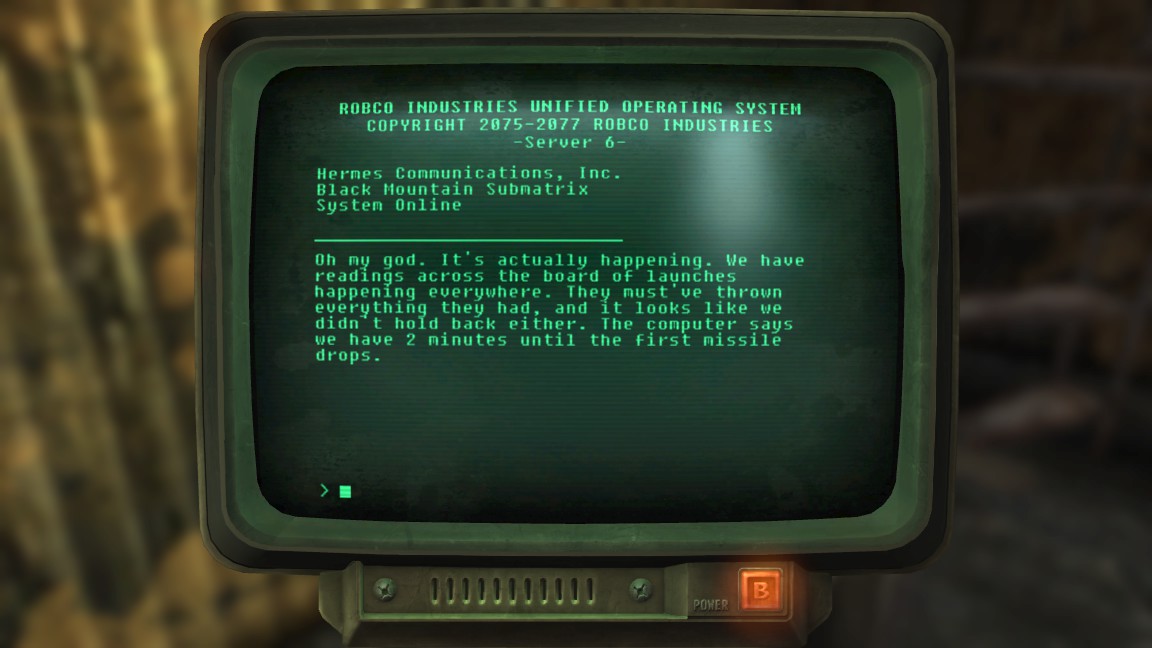 For instance, the above picture is a screenshot of a still-working computer that contains journal entries from the day the bombs were launched. All across the large open world found in Fallout players can discover little clues here and there that help tell the overall story of what has happened to this world.
The deep history of the Fallout world is not the only story present here, though. Many characters, even minor ones, have long histories that players could spend hours discovering. In several of the games, but most notably in "New Vegas," the protagonist picks up followers -- NPCs that can travel with your character. Each of these NPCs has their own quest, which you can only obtain once you have spent time with the characters and gotten to know them. 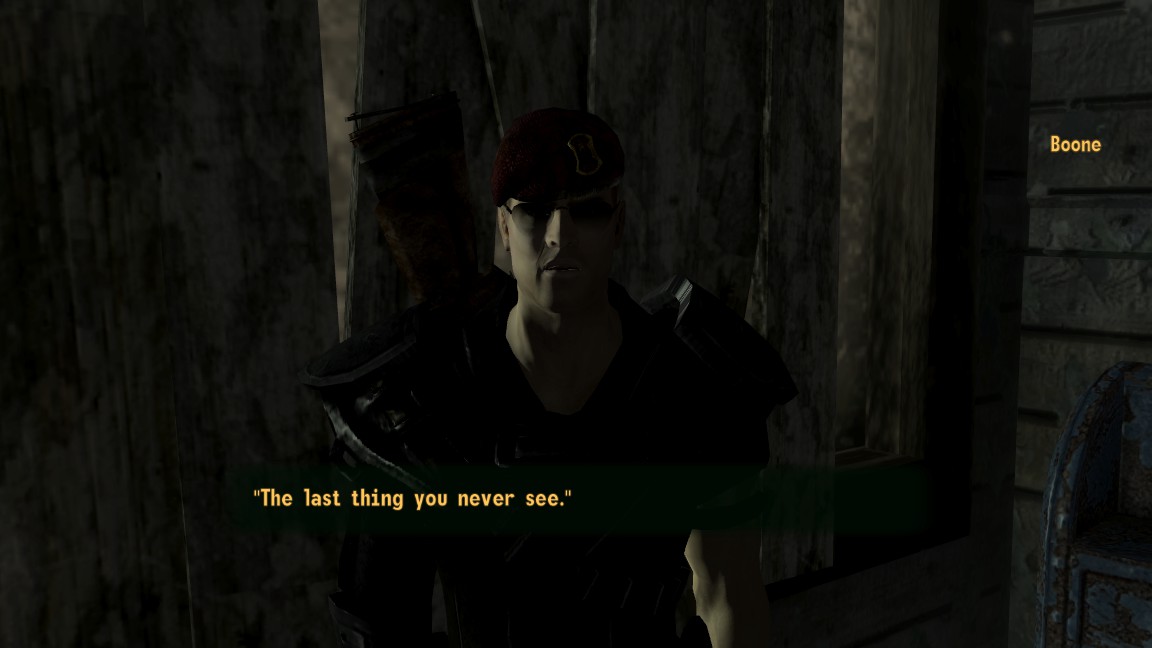 Pictured above is Boone, one of the first potential followers a player will likely encounter in the Mojave Wasteland. His story is rich with drama and hardship -- involving time spent serving in the NCR military, a disastrous event that causes him mild PTSD, and the eventual sale of his wife to Legion slavers by a neighbor. That's a novel's worth of information right there, and this is a character that the player may never even meet while playing the game (he is not involved in the main quest in any way). Boone is just one of many people in the Fallout universe that have detailed back-stories for the player to learn.
So how does any of this relate to Tolkien and Middle Earth, as the title suggests? Few authors take their work so seriously that they create an entire world in which to set their stories, but both Tolkien and the creators of Fallout have done just that. In both cases, the world was created before the stories that are set there, and the world itself almost seems to be more important than each individual story. Instead of updating the world as the story goes along, Tolkien and the Fallout creators mapped out their worlds almost in their entirety before anything was published. Though Tolkien has died, and all we have left to discover from his world are the few remaining unpublished notes that his family and heirs have yet to unveil to the public, the Fallout universe seems to be alive and well. It will be exciting to see what new stories and information Fallout's creators have to share with us when they finally reveal their next game.