To the Moon: 16-Bit Graphic Style Does Not Equal Poor Storytelling! 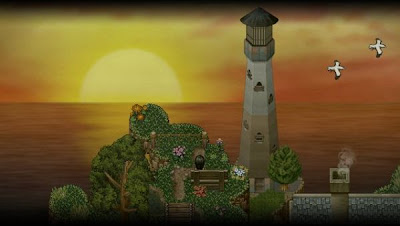 As usual, a few disclaimers first: yes, there may be spoilers in this article. This time, however, I must confess that I have not quite finished the game (I have been so busy working on my thesis, playing games is almost a thing of the past these days). So I do request that no one spoil the ending for me this time! Also, I understand that this game is not technically 16-bit because that would require that it play exclusively on a 16-bit console. The art style is definitely inspired by 16-bit era games, however.

To the Moon is a small game that has a story that could be easily sold on the big screen. Like The Time Traveler's Wife, the story involves an unusual form of time travel and a tragic romance. The story begins with a dying man and two scientists who are tasked with bringing about his greatest wish: to visit the moon. In order to do this, however, they must use futuristic technology to enter his mind and view the history of his life one moment at a time -- in backwards order. Though they are not technically traveling through time (they are, in fact, standing in the room with the man while they operate their machinery), their consciousnesses are transported into the man's memories, and they must use important objects that he remembers to continue to travel further back into his older memories. All of the characters in this story have deeply three dimensional personalities (even if they are portrayed in a two-dimensional art format), and the player is able to become very empathetic with them early on. For instance, it is made clear that there is something unusual about the dying man's wife. Eventually, players discover along with the two scientists that the woman had Asperger's Syndrome, a high functioning form of autism. Players live this man's life, albeit backwards, through the course of the game.

The concepts presented in this game are new, unusual, and highly literary. There is the traditional format of romance and science fiction, but these are only large blanket terms that barely begin to describe the complexity of the time travel dynamic involved in the science fiction, or the irregularity of the relationship between the central figure and his wife. Some may dismiss the game because of its older graphic style and assume that because the graphics aren't flashy, the game must be very primitive. In truth, however, the simpler graphics allow the player to become more immersed in the story, since he or she is not distracted by the graphics. There is no lack of beauty in the game's visuals, though. 16-bit graphic styles can be very pretty (and have a cult following because some believe they are the most beautiful graphic form), and in place of cut scenes, there are some gorgeous works of digital art dispersed throughout the game.

Even with an already intense plot to rest on, the game adds other entertaining elements to the mix. For instance, there is one hilarious moment early in the game where the RPG genre (to which this game arguably belongs) is clearly parodied. One of the scientists (whichever one the player picks to control) is taking a tour of the grounds with the housekeeper's two children. The children begin to discuss fantasy role playing, and the scientist, trying to seem cool, begins a "random battle" with a squirrel. See the scene on YouTube here.

As with many a complex story line, fan theories abound with this game. If you have already played and finished the game, browse the Steam community discussions to see what I mean.