Reputation does not equal quality -- especially when it comes to storytelling! In a Hack & Slash A-RPG like Diablo where most of the screenshots online resemble the above, one doesn't expect a highly detailed plot -- everyone knows the game is all about self-assurance through killing hordes of baddies and gaining ridiculously high stat points. Diablo III does, however, have a storyline. I'll admit, it's been many years since I played the previous installment in the Diablo series, and I do not remember a storyline at all (I know it had one, but for me it was definitely not memorable!). The plot of this game, however, seems to revolve primarily around which cutscenes the developers thought would look the coolest (and I'll admit, they do look pretty cool). Spoiler alert for the following Act II video:

But these glamorous cutscenes are quite few and far between. While they show an inkling of a plot, that plot is barely carried out through the actual active parts of the game. In fact, I became confused about what was actually going on in the story at a few points, just because I was being told to go out and, say, kill 100 zombies without getting a reasonable explanation for why I was doing this. And that's the point of an Action RPG such as this -- the player is not expected to be burdened with the storyline, instead you are expected to just do as you're told to advance through the game. At one point, the player character begins to be referred to as "The Nephilim," but his or her background is not given much detail. In chapter IV, the player is told that their character has no clear fate, and thus it is possible for that character to change fate itself. Again, this is not clearly explained. This part of the game, however, reminded me immediately of a much more story-driven, yet less well known game: Kingdoms of Amalur: Reckoning. 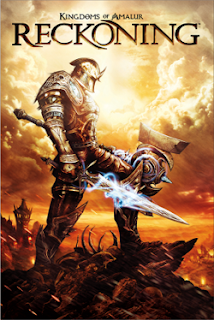 Though this game is more of an open world, traditional RPG, and despite its cheesy title, it seems to have everything that Diablo III lacks: a well thought-out plot, a vast history (see this linked video for more information on that), and a beautiful, huge world to explore. I tend to tell people that it's a lot like The Elder Scrolls series, but prettier. Like many other western RPGs, Kingdoms of Amalur allows players to create their own hero to play as. This is the case for Diablo III to some extent, though in Diablo's case players can only choose their class and gender. Even though the player has created their own character, however, that character has a rich and important backstory that is revealed little by little as the player progresses through the game, with the mystery of the player character's history finally made fully clear at the very end of the game. Not only does the main character have a rich history, but many of the surrounding characters have strong backgrounds and stories, as well. And here's the reason Diablo III reminded me so much of Kingdoms of Amalur: Diablo III's plot seems like a weak imitation of the plot of Kingdoms of Amalur! In both cases the hero has no visible fate, and can change the future accordingly. In Diablo's case, this is barely explained, yet in the case of Kingdoms of Amalur, this is the central plot point of the entire story.

Please share your thoughts on the matter below! Do you feel that Diablo III needed more of a plot, or are you fine with hacking and slashing for hours on end?