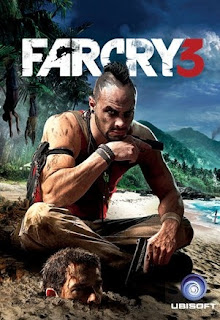 Once again I am far behind when it comes to my extremely large backlog of games. Recently I finished playing Far Cry 3. Having never played the previous games, I knew little about what to expect -- I had mostly only heard that the game is very violent and that the open-world experience is incredible. When I was told (by multiple sources) that the story was also enjoyable, however, I knew this was a game I couldn't pass up. So I got a copy of the game for PS3 and started playing -- and couldn't stop. The story in this game was so well done I found myself reacting to the story as I would a mystery novel. Immediately upon completing the "tutorial" portion of the game, a character is killed. Before this point, I had already been thinking to myself, "He's a cool character -- too bad he'll be the first to be killed off." Note that I had no prior experience with this game or series -- the storyline is just good enough in its narrative that I was able to analyze the story as I played, much as I would analyze the story in a novel as I read.
The creators of the game knew exactly what they were doing with the narrative when they created it. Like the great mystery authors of old, the creators of Far Cry 3 were able to predict exactly how their audience would react to situations and characters within the game, and they used a variety of techniques to let the player know that their thoughts were already known. As I said, the game is very violent. The violence does not detract from the story, however -- in fact, it adds to the experience and, if you are paying enough attention, it causes a lot of self-reflection. Much of the story revolves around villainous groups of modern-day pirates and those who do business with them. Many players will find that, though they can see that these villains are doing truly evil things, they actually like these characters. This is because the game's writers have made the pirates likeable, regardless of their evil deeds. After the battle with the first "boss" of the game, the game's writers make it clear that they know about your affection for the character that has just been killed by briefly showing a simple quote from Through the Looking-Glass (otherwise known as the second book in the "Alice in Wonderland" duo): "'I like the Walrus best,' said Alice: 'because he was a little sorry for the poor oysters.' 'He ate more than the Carpenter, though,' said Tweedledee" (Carroll 236).
By viewing this simple literary quote, players know that the character they just battled -- a character they found themselves liking -- is a representation of the Walrus, while the player is Alice. The same introspection that Alice must go through when she learns that the Walrus only seemed sorry for the oysters he consumed is then felt by the player, who must then think about the terrible things that this seemingly fun and favorable character has done. Alice's Adventures in Wonderland quotes are actually used throughout the game. This is a common occurrence -- many modern media that revolve around a character lost in a strange and unusual land use references to Alice. What is important here is the way in which the quotes are used. They truly make the player take pause and think for a moment about what is happening in the game.
Being an open-world game, there are a lot of opportunities for players to customize their experience with the game. In this game, however, the entire experience is created to elicit specific emotions from the player. At one moment, a player might be driving along in a car stolen from the pirates, listening to the radio that plays in most vehicles on the island. The player may suddenly see a person sitting in the middle of the road and have to stop or swerve to miss that person. When the player exits the car, she may find that the person in the road is a woman leaning over the corpse of a man and crying. One might infer that the man was killed by the pirates, or hit by another reckless driver on the road. Perhaps it was even the player who hit the man -- and now the player must see the results of her actions. Small moments like this are littered throughout the game. Even playing Poker can seem like a real experience. Though the NPCs that you are playing Poker with may repeat themselves from time to time, as NPCs tend to do, the atmosphere can make the experience seem more real than any other video poker game you have previously played. At one point I was playing poker with three other guys in a small bar on the beach. It was relatively dark in the bar, and it was night-time in the game. Suddenly, it began to storm in-game; the thunder was quite loud and realistic and the lightning could be seen through the windows. I felt a sense that I was actually playing cards with neighbors during a power outage.
It's difficult to describe the incredible experience that this game provides without giving away too many spoilers, so I would recommend playing the game yourself so you can see exactly what kind of experience the game creates for you. And now it's time for me to get Far Cry 4.


Announcement: Video Games as Literature will be participating in Sci-Fi month November once again this year! You can read about the event here. Last year I had a number of great ideas to write about for the event, but this year my brain's a bit dry in the idea department. If you have any suggestions for sci-fi related games that I should write about, please leave a comment!