What exactly is "Beyond" Good and Evil? 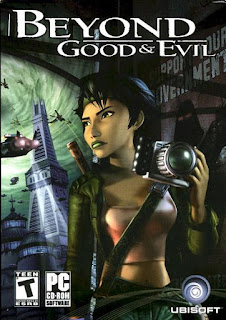 I recently finished cult classic Beyond Good and Evil for PS3 (the HD re-release) and found myself asking what the title means. Of course, there are a multitude of books and papers that discuss the difference between Good and Evil, how the concepts started, and the grey area beyond. My musings here will only cover the meaning within the game, as I don't have time to analyze the most controversial concept in human, nay, universal, history. For that, you can read Nietzsche. But I must wonder, why did the creators of this game decide to give it such a lofty title? Is the game deserving of such a heavy burden? Does it actually have anything to do with the pre-existing book of the same name?

First, let me break the game's storyline down into its most basic plot points and symbols:
Photography aside, these are pretty heavy concepts, to be sure. There isn't much that can bring a jolly conversation to a screeching halt quite like the topic of human trafficking. Aliens are no laughing matter, either. And yet Beyond Good and Evil somehow manages to bring all of these concepts together without receiving an AO rating.

The game's protagonist, Jade, becomes involved with an underground organization whose purpose is to expose evil deeds being committed by a militarized government. Jade's task is seemingly simple: using her trusty camera, Jade must capture photographic evidence of the government's misdeeds. Jade soon discovers, to the player's likely horror, that the government is literally kidnapping people and shipping them off to the moon to take part in a The Matrix-like alien slave trade. Throughout the story players follow Jade's interactions with her motley crew of different-species family members and friends, and constantly hear little bits of proverb about not leaving team-mates behind (particularly when a NPC party member gets stuck behind a door or otherwise falls behind). In some ways, the lessons taught here are simplistic and Sesame Street-like, though I must defend Sesame Street; at least, in my youth, it was a pretty complex show that taught valuable lessons to children and their parents while taking kids seriously. Maybe, like Sesame Street, Beyond Good and Evil intends to reach an open and impressionable audience and spread the message that family and friends are important treasures to cherish and protect. Cue the Yip Yips.

So, maybe familial and platonic relationships are beyond good and evil: maybe one must put aside all of one's personal affects when the life of a family member is at stake. Jade fights for good by exposing the evil being perpetrated by the corrupt government, but she is more personally motivated to action when her uncle is kidnapped. In this way, Jade sees her family as being more important than, or beyond, the philosophical fight between good and evil.

Have you played Beyond Good and Evil? What do you think is beyond the concept of good vs. evil? How might the game developers have concocted such a title? Of course, the most pressing question for most gamers is: will there be a sequel?

Don't forget: this month is Sci-Fi Month! What are your favorite literary sci-fi games?
Beyond Good and Evil Philosophy sci-fi month Sesame Street