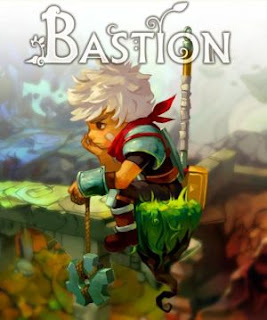 Bastion: one of my favorite games of all time. I first played the game a few years ago when it was sold in one of the early Humble Indie Bundles. Now that the game is also available for PS4 and PS Vita I've decided that it's finally time to write about it.

I immediately fell in love when I heard the narrator and realized that he was narrating everything that happens, because it's all part of the story. The narrator begins the story with "Proper story's supposed to start at the beginning. Ain't so simple with this one." The narrator then goes on to describe everything that happens; everything that the player causes the character she is controlling to do. The narrative can fluctuate based on the choices that the player makes. If you lead the PC, called simply "The Kid," to stay in one area and destroy all of the objects in sight, the narrator will say, "The kid just rages for a while." In a sense one could say that this narrator is telling the story in a stream-of-consciousness style. That style is highly unusual for a third-person narrator as he is narrating something that another person is doing, as opposed to narrating his own actions. Dictionary.com has several good definitions of "stream-of-consciousness"; here's a good one: "Of, relating to, or characterized by a manner of writing in which a character's thoughts or perceptions are presented as occurring in random form, without regard for logical sequences, syntactic structure, distinctions between various levels of reality, or the like." As the narrator himself says at the beginning of the game, he is not telling this story in a chronological or linear order. Instead, players experience the story from a point after the vague "calamity" that has occurred. Through finding objects and dusty remains of townsfolk we learn a bit about the world in which The Kid lived before said calamity. Certain things are never fully explained; for instance, players can never truly grasp what exactly the calamity was (Just that an act of war went horribly awry, as they tend to do) or why the paltry remains of the town are elevated in the sky. Even so, the story that is given is beautiful and heart-wrenching. Likely the vagueness of certain elements of the story are as ambiguous as they are because the player is gleaning information that only the narrator and The Kid know. These characters were not directly involved in the events that caused the calamity and through their own confusion and post-traumatic stress players must put together the pieces of the story.

In some ways the delivery of this heart-wrenching story depends on the beautiful music and painted scenery in the game. Most of the few characters found in the game have their own vocalized theme song. Even if you don't listen to the lyrics (which are often surprisingly aggressive) the songs can bring a tear to your eye. The beauty of the world that has been destroyed by the calamity is still evident when The Kid visits various locations, and sadness can be found in the narrator's description of how the world once was, and the fact that this new world through which The Kid trudges is, though beautiful, no match for the pre-calamity world.

At the end of the game, the player is presented with a hard choice. The player's own moral perspective is invoked here, as there is no clearly right choice. Arguments are made for each possible outcome, and the player's choice affects the future of the world in which she has just likely spent approximately 10 or so hours. I won't say any more on the topic for fear of spoiling the game, but I will say that after you, the player, make this choice, you will likely wish to re-start the game in New Game Plus just so you can re-enter the world of Bastion and see what happens when you make the other possible decision.

For any of you who have already played Bastion, which version did you play? If you've played multiple versions, which did you prefer? I will admit that I preferred the PC version over the PS Vita version (which is what I have most recently played). The graphics seemed to have been scaled down a tad for the Vita version (I haven't played the game on PS4 yet, so I don't know if this statement applies there, as well), though it has been a few years since I first played Bastion on the PC.
Bastion narrator stream-of-consciousness