Book Review: "Game On, Hollywood! Essays on the Intersection of Video Games and Cinema"

February 27, 2016
I love browsing books on the shelf in my local library. I headed into the stacks yesterday to look for a book titled Vader, Voldemort and Other Villains (I thought it sounded cool) and ended up checking out a book I had never heard of before: Game On, Hollywood! Essays on the Intersection of Video Games and Cinema. My very first reaction was one of excitement; Ramona Flowers is on the cover. The authors in this book must know what they're talking about. 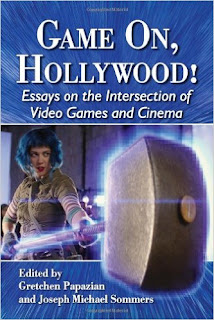 Now, you may note that this book is about the connection between video games and cinema (or movies and television), which is a tenuous but existent section of the literary world. You may imagine that every movie you can think of that was based on a video game has been pretty poorly made, and in many cases you would be correct. Hollywood has had a lot of trouble translating video games into films. The authors of this book agree, stating that "early games have a tenuous history of direct translation to film and television" (2) but then they list some games that, if you really think about it, have been quite successful in translating their stories to the screen. These games include Pokemon and Final Fantasy (I know Advent Children was silly at times, but somehow I keep watching that movie -- it just pulls me in over and over again!). The authors then discuss games that have cinematic cut scenes that are almost more film than game, with the most obvious entrant in that category listed first: Metal Gear Solid 4 (Ninety-minute cutscene, anyone?). By the way, I love the continued references in this book to the film The Last Starfighter. Show of hands: who's seen that movie? Furthermore, the authors question the concept of narrative itself, asking, "What actually is narrative today in 2013? What can it be? Is there anything that it can not be?" (12) This seems to be exactly what I am exploring in my blog, as I discuss video game narrative and its importance in the modern literary cannon.

All of this, mind you, is in the introduction to the book, The meat is in the articles which make up each chapter. And what interesting essays they chose to feature in this collection. Most of the essays are about games I haven't played, and some are even about games I hadn't heard of before this reading (which is surprising considering my large personal collection of not only games, but also information on games). The first essay discusses player agency and how it relates to narrative in the game Buffy the Vampire Slayer: Chaos Bleeds, a clear tv show tie-in. This essay represents the concept of film-to-game tie-ins and how games in this category are able to stand on their own as representatives of their franchise. While a little dry, parts of this article were an interesting read; other parts seemed unnecessary. For instance: there's a lengthy definition of the term "gothic" as it is used in a literary context. I'm not sure that Buffy fits the traditional gothic storyline very well, but I can understand why many authors and critics want to categorize it as such. Of course, I haven't played the game that this article is primarily discussing, so I can't formulate my own opinion on its potential gothic origins. Mentions of important gothic works, such as The Castle of Otranto, are present in this chapter, so at least it is clear that the author is knowledgeable of the genre.

Chapter two is once again about a game that I haven't yet played: Dead Rising. I sense a pattern: many academics writing about video games primarily play X-Box games. Since I rarely play X-Box titles, this puts me at a slight disadvantage. This article and the next, which focuses on the Western genre, have interesting points, but neither are specifically about topics that are within my immediate area of interest, so I must admit that I skimmed them. I was eager to get to the next chapter, which focuses on one of my favorite games: Prince of Persia: The Sands of Time and its abominable (in my opinion, even if I don't share that opinion with the article's author) movie re-make. The author argues (hilariously) that because the critical and general response to the film was only mediocre, rather than terrible and pitchfork-raising, the film succeeded where other game-to-film adaptations failed. Of course, the way that this author grades his game films on a sliding scale does not seem to account for films that actually were a great success, like Tomb Raider. I will likely take another look at this article when I write my own on Prince of Persia (which will be coming eventually -- it's such a wonderful, story-driven experience!).

The rest of the articles are a mixed bag. Some of them are surprisingly interesting, such as the one on Dante's Inferno (Can you believe that I still haven't played that game?). Some of them are relatively dry. Overall, the tone of the book gives me hope. It's very exciting to see that there are numerous other scholars writing scholarly work on video games. It's especially interesting to me when scholars leave the beaten path and, rather than writing on extremely popular games such as Call of Duty and World of Warcraft, study significantly lesser known games like Buffy and Dante's Inferno. It's clear that the scholars writing in this book are real gamers with a passion for showing the world that video games are a valid medium.

If you have any ideas of books that I should read (that I haven't already listed in the Bibliography), let me know in the comments!