We've Made The New Yorker!

October 19, 2016
Rejoice, gamers, for a video game has been referenced in that oh-so-literary magazine, The New Yorker. It's not much, but an acknowledgement that their readership would understand a video game reference is certainly a step in the right direction for canonizing video games as a form of literature. The reference appeared in a cartoon published today, as seen below: 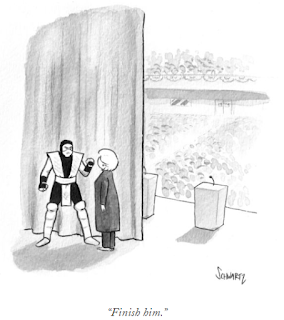 While "Mortal Kombat" may not be the most literary of games, and many New Yorker readers have already pointed out that Scorpion never actually says "Finish him" in the game, I still feel that this piece shows just how far we've come in the area of video game acceptance. Game developer Brianna Wu gave some interesting insight on this on Twitter:

What are your thoughts on video games being granted a presence in The New Yorker?

In other news, I do apologize for not updating regularly. I'm almost finished with my Master's thesis and I have had no time for any extra writing of any kind. I will be participating in Sci-Fi Month again next month, however, so you can look forward to some entries then!